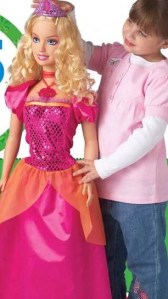 One year my daughter asked Santa for a “My Size Barbie.”  A “My Size Barbie” is a Barbie doll that has been fed huge amounts of hormones at the factory causing her to become the size of Daryl Hannah.

To ensure that “My Size Barbie” would be in stock, I went to the toy store early.   I approached the Barbie aisle and was about to ask where I might find The Big One, when I tripped over a humongous box containing “My Size Barbie” nearly breaking “My Size Arm.”

The adrenalin rush I experienced from the fall enabled me to heft the package containing The Incredible Babs onto my cart, but not being Arnold Schwartzenegger (or even Maria Shriver), I wasn’t strong enough to maneuver the box so that I could see the price tag.

I inched my Barbie-burdened cart to the checkout stand where it took four of us to hoist The Big Gal onto the scanner, and I mentally noted that perhaps some low-fat Barbie cuisine would make an apropos stocking stuffer.

“Do you know how much this is?” I asked the clerk.

“I’ll let you know in a sec, hon,” she said as she fired up the jaws of life to help her run Buxom Barb over the scanner.

As I waited for the price to appear, I recalled a Christmas of long ago when I had received a Barbie Dream House.  My mother had lovingly assembled it all by herself.  It had taken her the better part of the Kennedy administration.

That had been my favorite Christmas and I owed it all to my mother and to my Barbie.  How ironic that this Christmas I would be giving my daughter The Mother of All Barbies.

One-hundred and twenty-eight dollars!  Suddenly everything began to move in slow motion.  I could feel myself turning white . . . then red . . . then green . . . like an aluminum Christmas tree on a rotating stand.

I looked at the clerk, then back at the 20 or so people waiting in line behind me.  They were all staring at me and sighing a lot.  Maybe they were thinking that I shouldn’t let my daughter down for a few lousy bucks and that I should forget the expense because, after all, it was Christmas.  Finally, a gentleman from the back of the line offer his advice:

Then the clerk from the neighboring checkout stand shouted over, ” My niece has one of those and they can  wear the same clothes!” And then, just to bring it on home, she added, “I think she comes with an entire wardrobe!”

The clerk and I quickly tried to figure out how many outfits were included, but that information was on the opposite side of the box and somebody else was using the forklift.

In the end, I paid with a check so big it would have made “My Size Barbie” proud.  And as the crane lowered The Ultimate Barbie onto the roof of my car, I knew in my heart I had made the right decision.

When Christmas morning came, my little girl would open her very special present, and the wonder and joy that is Christmas would be captured again for one brief, shining moment.

I say brief because the day after Christmas, I made “My Size Barbie” go out and get a job. 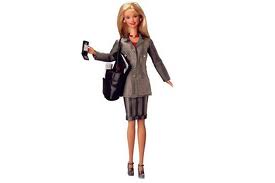