Hello Dear Readers! Welcome to Linda’s Incomprehensive Guide to Exercise.  Let’s dig right in, shall we?

The only kind of exercises that existed in the 50’s were jumping jacks, deep knee bends and squats and nobody did them without being forced to do so by a P.E. teacher, a football coach or a drill sargent. Those were the good old days when people ate anything they wanted and only went for walks to commune with a pack of Salem Cigarettes. 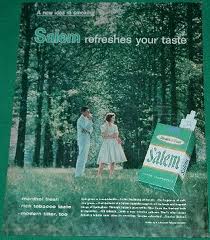 In the 60’s, exercise  boiled down to a little globule  of a man named Jack LaLanne.  Every day millions of everyday women would stand in front of their television sets to watch tiny Jack LaLanne cutely dressed in a teeny-weeny, one-piece jumpsuit, doing deep-knee bends while singing the praises of vitamins and veggies.  He is still alive to this day but, unfortunately, has continued to shrink  little by little over the years and, sadly;  is now only visible through a microscope. 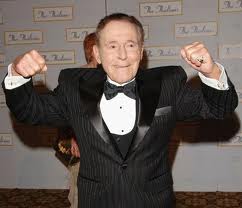 Here’s Jack trying not to shrink out of his tux.

Somewhere around in here we got Jane Fonda. Jane was a busy Seventies Gal running around in her shag haircut winning academy awards, making aerobic videos and being against the Viet Nam War.

Everywhere you looked there was Jane Fonda shagalistically shorn in her leotards and leg warmers stretching, reaching, pulling, clawing and cloying.  Looking back it was quite Hanoi-ing.  But she single-handedly started the Aerobics Craze so you have to hand it to her — or trip her whichever you prefer. 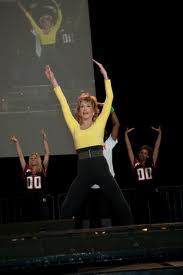 Can it get anymore Hanoi-ing?

History of Exercise: 1980-something to somewhere in the 90’s on up

Somewhere in here Richard Simmons skipped onto the scene. What Richard Simmons had going for him was a heart of gold combined with an uncanny ability to sweat to pop songs that weren’t popular anymore.

Richard won over the hearts of  Americans by crying tears of happiness about how he used to be fat but wasn’t anymore; and he didn’t want you to be fat anymore either because it made him cry because you’re so, so fat and he’s not fat anymore.

Lately however Richard Simmons seems to have fallen off the face of the planet . . . or was pushed.

In the interest of brevity, let’s be brief.  Exercise today boils down to one word:   Bicycling.  But not the old-fashioned kind of bicycling we all knew and loved in the 1950’s.  When bike riding simply meant hopping on our bikes wearing jeans and a tee-shirts and riding around the block while smoking  Salem Cigarettes. 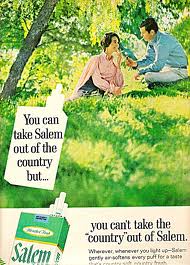 Now Riding a Bike is Groovy!

There’s a new, groovy way of riding one’s bike called cycling.  When cycling one must take up an entire car lane and pretend that one can pedal as fast as a car.

This is hard to pretend without the proper “pretending apparel” called cycling apparel which is a necessary technical piece of equipment necessary to make you comfortable technically while pretending to ride your bicycle as fast as a car can go.

It also helps if you make a “vroom, vroom” noise under your breath as you pedal along. 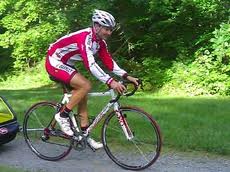 The New Groovy way of riding bikes can be a bit dangerous in heavy traffic, sure, but not too worry.  For every bicyclist that is run over by a car, a pedestrian somewhere in the world is being run over by a bicyclist.  So you see, it all evens out in the end.