Skip to content
HomeDon’t Thank Me, Thank My Noble Metabolism

My metabolism has slowed down so much lately that not only will I gain weight if I even look at a piece of cheesecake — so will the person standing next to me.

Some people complain of a sluggish metabolism. If I could get my metabolism up to sluggish, well . . . I’d be in metabolism heaven, that’s all.

I’ve Got a Metabolism That Punches Out at Noon

I’m starting to get the feeling my metabolism goes home early everyday. I think it’s getting bored with its job. And who could blame it, really. Talk about a backlog of work! Poor Dear.

I would imagine the piles of cheesecake in its In-Basket alone is enough to make even the most dedicated of metabolisms want to call in sick.

What’s a Food Consumer to Do?

Still, even though my heart goes out to my metabolism, it would be nice if it could step up the pace just a little. I’m doing my part by carefully monitoring what I eat. I read all the food labels and whatnot; but it isn’t easy finding a food whose first ingredient is air.

My Life as an Air Fern

I think Mother Nature rigged so it so a woman of my advanced years can live indefinitely on air to keep mankind from going extinct.

As far as I can tell, Our Family of Humans evolved so that Grandma could keep the cave clean, do all the cooking plus watch the grandkids without having to eat any actual food — which meant Yippee!! Extra helpings of Kentucky-Fried Mammoth for everyone! (Except you know who.) 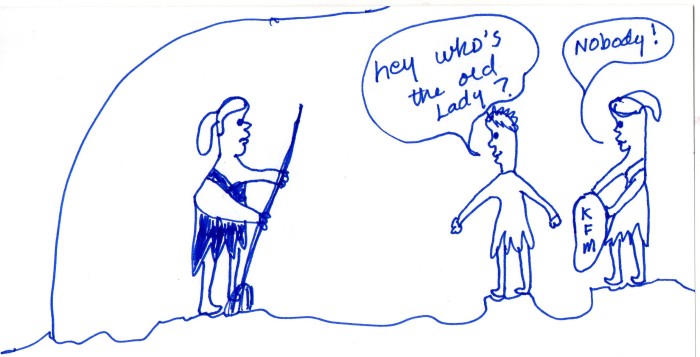 Me and My Metabolism, Where Would Mankind Be Without Us?

Thus ensuring the survival of our species.

Who knew something operating at zilch could be so noble?

2 thoughts on “Don’t Thank Me, Thank My Noble Metabolism”