Welcome Dear Readers to this week’s edition of Gregory’s Bible Stories. Today Gregory learned more about the adventures of Gideon.

Let’s listen in shall we?

Last week, the Lord sent a supernatural, glowing, angel who was wearing a radiant robe that had the words “God Squad” illuminated across the front of it with a message from the Lord about how He wanted Gideon to rescue the Israelites. The Angel was also carrying a magical fire stick.

But Gideon wasn’t convinced that the angel was really a messenger from God because in those days angels were always popping up left and right and magical fire sticks and regular sticks were practically identical.

Gideon needed more proof that God wanted him to rescue the Israelites, so he asked God to perform the wildly-popular Wet-Wool/Dry-Wool miracle which was considered the G0-To miracle in those days for Generation 3000 BC Millennials.  The conversation might have gone something like this:

The Lord:  So, Gideon, did you get my message from the angel about how I want you to rescue the Israelites?

Gideon: Well, Lord, I was hoping that instead of a message from an angel that  you’d perform the miracle where I leave some dry wool outside at night to see if it was still dry in the morning.

The Lord:  Aw come on, Gideon!  That’s such a lame miracle. If you really want a miracle, I could part the Red Sea.

Gideon:   Meh . . no offense but that’s a little passé don’t you think?

The Lord:  Okay  okay! I forgot how spoiled you 3000 BC Millenials are!

The Lord:  So Gideon, I see you have amassed a great army to rescue the Israelites.  How many have you amassed thus far?

The Lord:  Uh . . it looks  like about twenty thousand.  Uh oh.  With so many men, they’ll  be sure to win the war against the Medianites and then nobody will give Me credit for it. And even though I’m God, I still hate it when that happens. We’re going to have to weed some of them out.  I know!  Let’s send everybody home who is afraid.

The Lord:  Did you send home everyone who was afraid?

The Lord:  Hm . . . that’s still too many . . .oh I know!  Send them all down to the river to get a drink and then I’ll come along and send the guys home who drink out of the river like a dog. Then just to be on the safe side, I’ll throw a stick really far away and that should take care of the stragglers.

The Lord: Okay Gideon how many we got now?

Gideon:  Wait a minute, Lord.  I see  a couple of them are turning around three times before lying down.  Should I get rid of them too?

The Lord:  No.We’ll keep them as subs.

Gideon:  Good idea!  They don’t call you The Lord for nothing!

The Lord:  I love you Gideon that’s why I just created this stack of bibles with your name on it!

And that concludes part II of the adventures of Gideon.  Please check back next week at this same time when Gideon’s servant, Purah, comes up with a fantastic money-making idea for Purah-ina people chow. 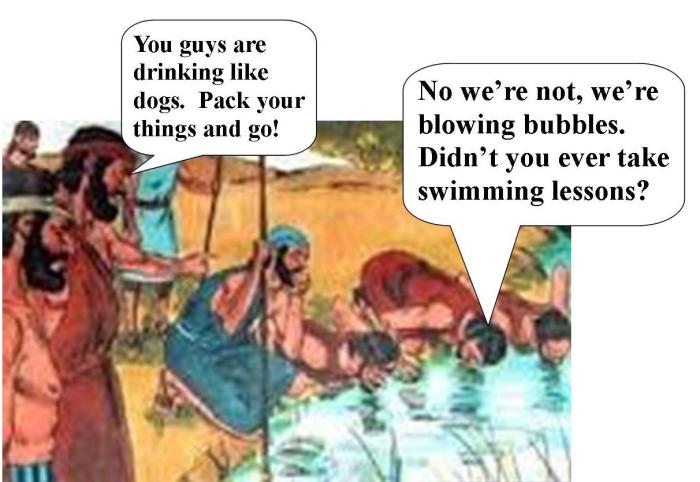