Welcome Dear Readers!  Good News!  You are just in time for our Slightly Creepy Seventies Fix, where we look at pictures from the seventies that make us shudder and feel slightly sick to our stomachs because they are so weird and creepy.

It’s the kind of perverse pleasure only the Slightly Creepy Seventies can provide!

Today we’ll be making fun of this treasure from 1970:

“Well, honey, I like the new Seventies kitchen remodel, sure, but where will we put our books?”

Nothing epitomized a Seventies carefree childhood like a random ladder to nowhere.

And no Seventies bathroom remodel worth it’s weight in Mr. T gold chains was complete without a primitive seventies tanning bed.

And of course, every Seventies remodel had to feature a pool made out of horrendous “bricks of the seventies!”

“How very Frank Lloyd Wrong of you, Dear!”

Welcome Dear Readers!  Today, if you’re not feeling a little nauseous already, I thought it might be fun to flip through this House Beautiful Magazine from everyone’s favorite icky decade:  The Slightly Creepy Seventies!

Now let’s turn to the next page shall we?  Ready?  (I’ll wait if you want to pop a Pepto Bismal.)

Now, this room is a good example of what happened back in the 70’s when your Slightly-Creepy Seventies Interior Decorator scarfed down a big bowl of yellow chrysanthemums and washed it down with a great big pitcher of ice-cold LSD for breakfast and then rushed over and redecorated your family room while in the throws of a cheerfulness overdose.

So I guess you could say there’s an upside to everything.

And speaking of rocking chairs on the beach, I think I vaguely remember a Brady Bunch Episode involving a rocking chair/beach incident: I’ll try to retell it as best I can from memory:

Mike Brady: MarshaMarshaMarsha!  Peter! Greg! Cindy! and Whatever the rest of your names are!  We’ve driven 87 hours and we are finally at the beach!

MarshaMarshMarsha:  But Dad, we live somewhere in LA.  Why did it take us 87 hours to get here?  The Pacific Ocean is just down the street.

Carol Brady:  Oh Mike, you did it again. Hahahahahaha!  You turned left when you should have turned right!  Hahahahaha! We’re not at the Pacific Ocean, children, we’re at the Atlantic Ocean! Hahahahahaha!

Alice:  Hahahahahaha!  I’ll lug the rocking chair down to the beach while you Bradys wait in the car and laugh.

Alice:  Wait a minute!  Hold the landphone! The rocking chair’s not here!  Somebody forgot it!  I’m not one to point fingers but I think it was MarshaMarshaMarsha.

Mike Brady:  Well, kids, it looks like we’re turning around and driving 87 hours home to get it.  Hahahhahaha.

Carol Brady:  But wait Mike, you left MarshaMarshaMarsha at the Atlantic Ocean. 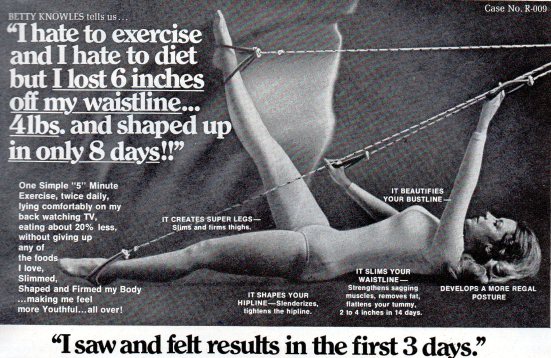 Her name was Betty Knowles and she lost 4 pounds and 6 inches off her waist in only eight days back in the Slightly Creepy Seventies using this lever and pulley exercise contraption. Unfortunately, once  Betty got it all set up and herself situated inside of it, she could never figure out how to get out.   Eight days later Betty was not only  much, much slimmer, but also, she wasn’t wasting valuable time breathing or having a pulse anymore. Unfortunately she wasn’t found until last week about a quarter to five.

Proving once again there’s an upside to everything!

Well, Dear Readers, that’s it for today.  If you need me I’ll be down at the Pacific Ocean.  I’ll be the one sitting in the rocking chair eating a big bowl of yellow chrysanthemums.

Welcome Dear Readers to the world of the Slightly Creepy Seventies where we  trip down memory lane by revisiting the pages of old magazines from the inexplicable decade of the 70’s. 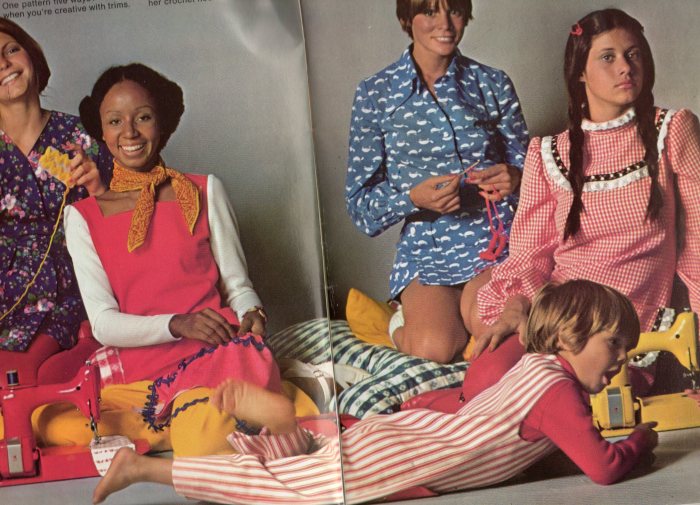 *Note the little boy in the striped, home-sewn whatevers is keeping a low profile.  It seems one of the teenagers between 35 and 40 has started a family unbeknownst to mom.  Sh . . .I won’t tell if you won’t.

Of course the Master Plan of sewing for your teenage self in the Slightly Creepy was to: “Create Your Never-Can-Be-Duplicated Specialness!” 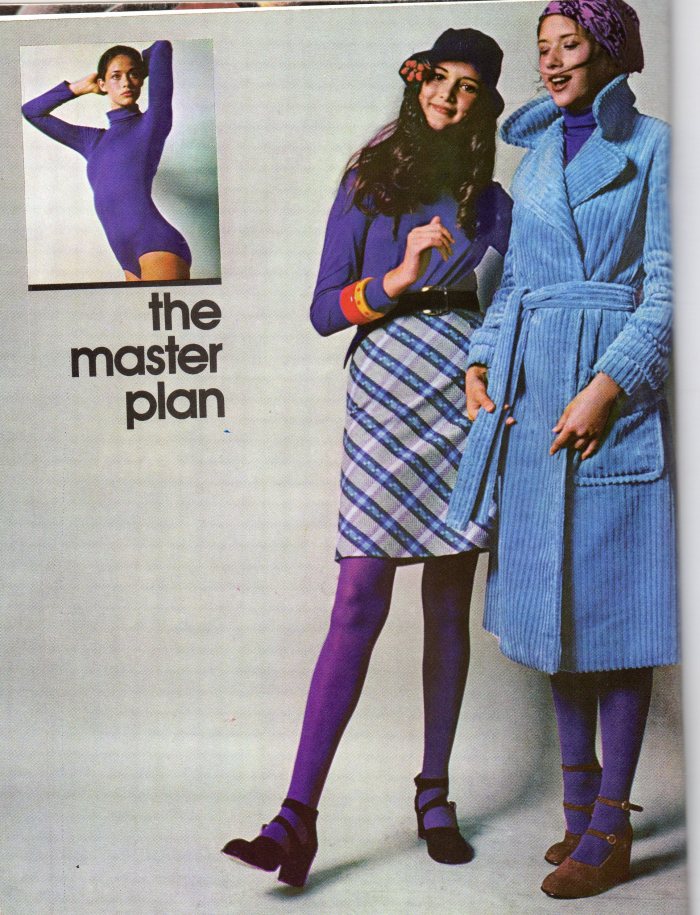 Well okay then!  And what better way to do that than to sew yourself a bathrobe and wear it out in public.  Oh and don’t forget that really good friend with the cheerfully sympathetic expression to walk along beside you with her hand on your back like she’s guiding you as you schlep from place to place.

That way people who don’t understand your never-can-be-duplicated specialness, will just have to assume you’ve recently gone blind and haven’t figured out a workable system, as yet, for getting dressed in the dark. Either way it’s a slightly creepy seventies win/win! 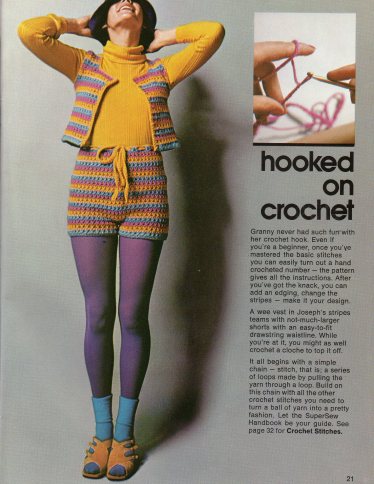 In a decade where everybody started their day out by brushing their teeth with cocaine,  gargling with LSD and using a Mescaline moisturizer, what most people don’t realize is that it was actually crochet addiction that was responsible for ruining more 1970’s wardrobes than cocaine, LSD and Mescaline combined!

For Jessica, it all began with a simple crocheted chain stitch a couple of times a week.  To unwind from a hard day of wandering around town in her corduroy bathrobe.  No harm done really. Until she started lying to granny about all the “missing” yarn.  Before you know it, she was parading up and down the streets in  purple leotards and blue anklets wearing her crochet addiction on her sleeve like a an ugly crocheted vest and hot pants — begging strangers for money and lying that she was only going to use it to buy some Mescaline Moisturizer when in reality she was going to use it to buy a basket full of kittens and yarn —then shoo away the kittens. It didn’t end well for Jessica. Today she lives in a van down by the river she crocheted herself. (Both the van and the river.) 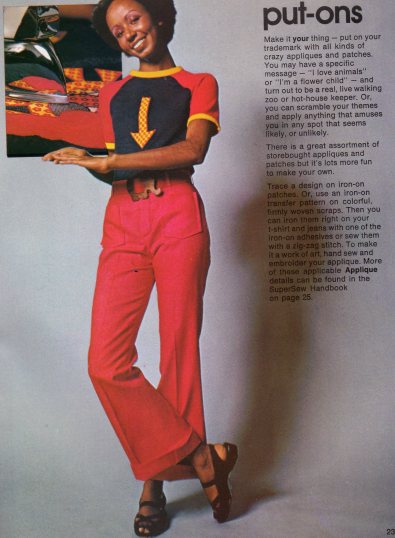 Sure, this slightly creepy seventies teen looks 45 but that’s only by today’s standards.  Back in the Slightly Creepy Seventies she didn’t look a day over 13!  Why? Because she’s wearing a shirt with an arrow appliqued on it that’s why!  An arrow that proclaimed to the world, “Yes!  I have an arrow on my shirt, so?  You got a problem with that?  Get over it Mom!  Get over it Dad! Get over it establishment!” Right after this she went down and signed up for a fake senior discount card!  In your face boss man.   You go teenage girl who looks 45! 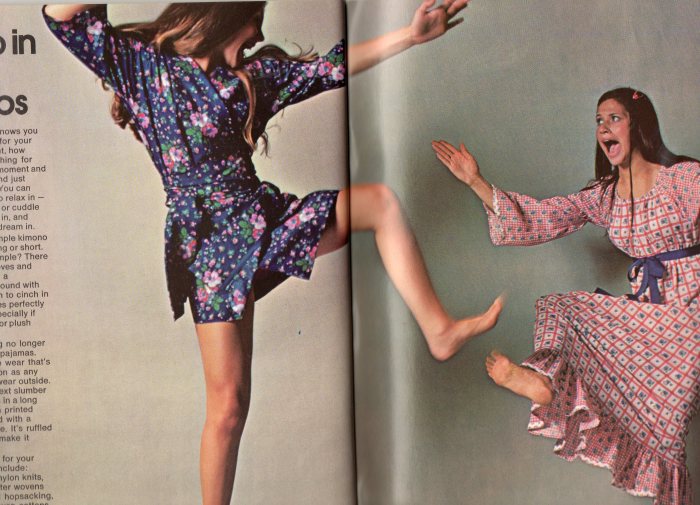 Uh Oh . . . It looks like this Slightly Creepy Seventies slumber party where everyone sewed themselves a nightgown has taken a turn for the worse. Obviously Jessica and Jessica are suffering mightily from crochet addiction withdrawals and are engaged in a fight to the death for the last ball of granny’s yarn.

And there you have it, Dear Readers, this edition of the Slightly Creepy Seventies.   But remember, even though it is now 2015 — if someone invites you to try crocheting?  Better stay on the safe side and just say no!

Welcome Dear Readers!  Gosh it’s been a long time since last we clapped eyes on the home decor horrors that only the Slightly Creepy Seventies can provide. That’s why I was delighted to run across this family room decorating book from 1977 and just in time for Halloween! 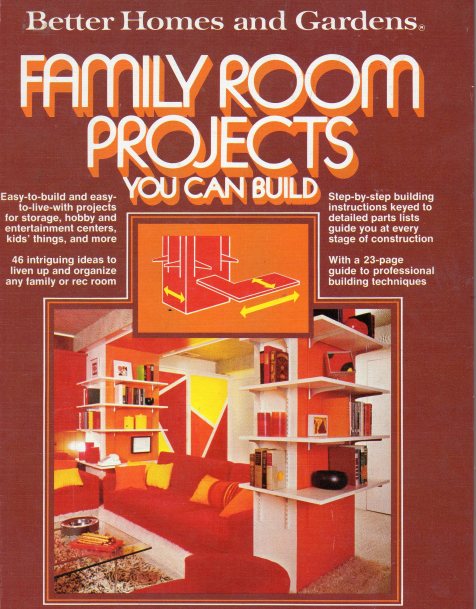 Whenever the family entered this Slightly Creepy Seventies family room, and once they had regained their balance, Mom and Dad got right down to the task of puffing Benson & Hedges cigarettes one after another in order to fill up their family-sized ashtray guaranteed to hold enough stubbed-out cigarettes to give the entire clan COPD in a single evening.  But not to worry, everybody was already hyperventilating from the decor anyway, so hey!  At least they were breathing! (Sort of . . .)

If this doesn’t make you want to hum the theme from Jaws, nothing will. 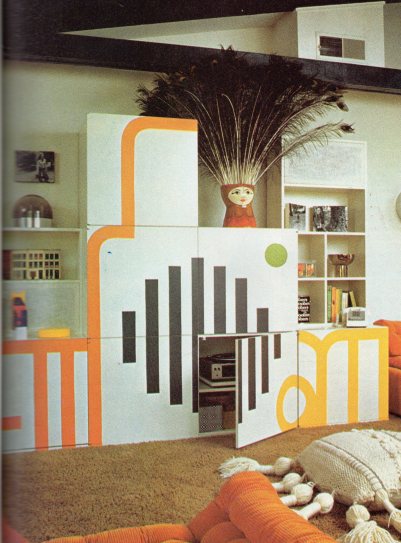 And why are there no people in this Slightly Creepy Seventies family room, you ask?

Ha ha!  Because they are all hiding in the “modular storage center that fits almost anywhere” or anyone.   And thank goodness for that!  How else would they be able to hide themselves from the giant killer macramé pillow that is obviously taking orders from the Slightly-Creepy Seventies Peacock Feather Vase Goddess?

I’ll bet the whole family is thanking their lucky stars right now that daddy scarfed down his cocaine-sprinkled oatmeal this morning or he would have never had the wherewithal to come up with the idea for this clever dual storage/hiding-from-murdering-pillow decorating idea.  But uh oh!  Look out Little Joshie!  You left he door open! 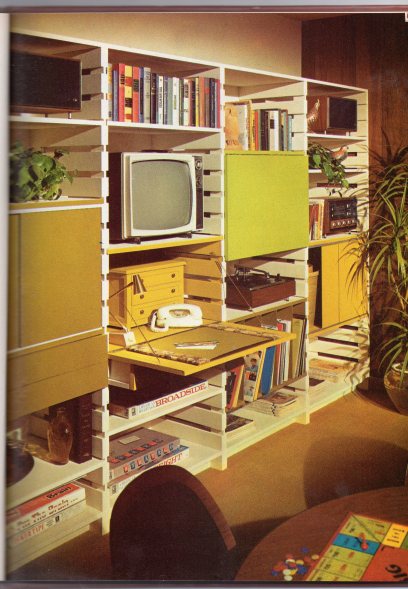 The genius that designed this Slightly Creepy Seventies entertainment center thought of everything right down to the board games that family members can play while Mom is yakking on the phone for hours blocking everybody’s view of their Slightly Creepy Seventies state of the art 12-inch Zenith television set — so much so that nobody in this poor, Slightly Creepy Seventies’ family ever found out whether or not Mary Tyler Moore did indeed make it after all. (They did get to see a cool explosion on Rockford Files though . . . well, not exactly — but the way Mom described it, it sounded cool!)

And of course no Slightly Creepy Seventies family room is complete without a plant phone booth (if Mom will ever get off the phone and let the plants use it, that is). 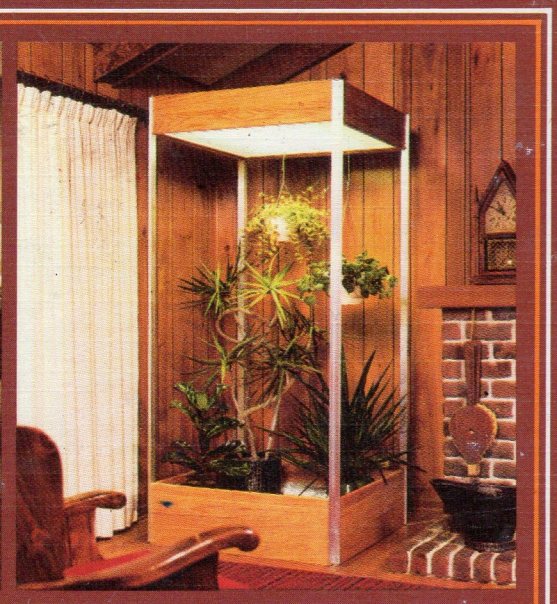 What better way for a family to pass through the tedious decade of the Slightly Creepy Seventies at a snail’s pace than to actually pull up a chair and literally watch snails’ pace?  Answer?  No better way!

Well, that is if you don’t count Mom describing to everyone how exciting it was when Jim Rockford got in that high-speed car chase and ran over Mary Tyler Moore and made her hat fly up in the air.  At least, Mom’s pretty sure that’s what happened — but then again she was talking on the phone at the time —  and in the Slightly Creepy Seventies, multi-tasking hadn’t even been invented yet.

And there you have it, Dear Readers, a little Halloween Horror in the form of the Slightly Creepy Seventies, now go have a fun Halloween and try to forget the horror you saw here.