Last night, I was browsing through this 81 year-old Saturday Evening Post (I’m trying to catch up on my reading), when I came across this ad:

This ad states that in 1931,  Gluey Paste was used in over half of schools in the United States.  It doesn’t say what the other half used,  I’m guessing Pastey Glue.

And since it was the Great Depression,  it’s also probably safe to assume  that whether it was Gluey Paste or Pastey Glue — it was certainly the favorite breakfast choice for United States school children everywhere.

Underneath that ad was this happy thought: 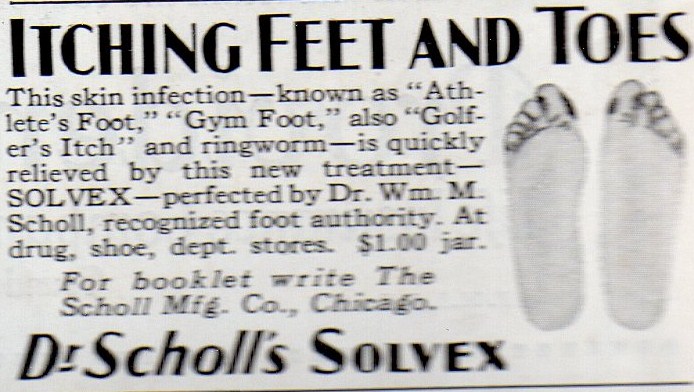 As the ad so carefully blurts out, if your feet (and toes) are itchy you, could have anything from Athlete’s Foot to Gym Foot — maybe even going so far as to have contracted a case of Golfer’s Itch which is apparently a subsidiary itch of the athlete or the person who frequents a gym.

The ad also mentions ringworm right after mentioning
Golfer’s Itch.  So apparently back in 1931, it was common place to contract ringworm while golfing.

Of course, it was nothing to worry about since Dr. Scholl’s Solvex could be used as a remedy and purchased for a buck.  And if that didn’t work, you could always steal some Gluey Paste or Pastey Glue off some United States School children and give that a go.

And of course, what man could hold his head up in public without:

Apparently in 1931, there were two ways to wear one’s hair.  Brushed or Well Brushed.  The pinnacle to which one could aspire hair-wise in 1931, was to have “well brushed hair all the time,” in addition to a “healthy scalp” (Apparently a healthy scalp wasn’t a given and there were a profusion of unhealthy scalps to be encountered at every turn that one must politely ignore.)

The ad goes on to imply that in order to get both well brushed hair all the time AND a healthy scalp simultaneously, one must pour liquid hair dressing on one’s head taking great care to smell it first.

It goes without saying, of course, that said wearer should thoroughly saturate the hair and scalp in order to get that freshly applied “oily glow” hence the catchy name: Glo-co!

So there you have it, Dear Reader!  And what did we learn today?  Let’s review in case you suddenly find yourself whisked away to the Great Depression: