Hello Dear Readers. As you may recall, from time to time, this blog takes it upon itself to try to cheer up America’s most famous Gloomy Gus, Edgar Allan Poe. 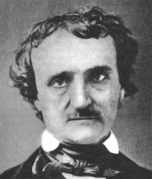 “At midnight, in the month of June, I stand beneath the mystic moon.”

“Uh . . . Edgar, what are you doing outside at midnight?  Don’t you realize it’s 1835 and antibiotics haven’t even been invented yet?  It’s almost like you’re trying to catch cholera. For god’s sakes, Edgar, go home and go to bed!”

“An opiate vapor, dewy, dim, Exhales from out her golden rim.”

“Okay, I hate to be the one to break it to you, Edgar, but the moon doesn’t have a golden rim; plus, I’m pretty sure the moon’s a boy.  I really must insist you put down your pipe now and go in the house.”

“And, softly dripping , drop by drop, Upon the quiet mountain top”

“Now that’s a nice upbeat phrase.  I like it because it’s positive.  Why don’t you tell me another one while I lead you into the house.    I’m just going to take you by the hand!  Yikes your hand is cold!” What do you have ice cubes in your pockets?”

“The rosemary nods upon the grave; the lily lolls upon the wave”

“Sckrrrreeeechk . . . record scratch!  There you go again with the graves. I don’t care if ALL your friends are dead, Ed, sitting around the graveyard moping 24/7  is just going to make things worse.  Oh, and are you sure lolls is a word?  You might want to double check it with your friend, Daniel Webster — if he’s still alive, that is. Ha ha.  No! No! Edgar he is still alive I was just kidding.  It was a joke Edgar!”

“All beauty sleeps!- and lo! where lies; Irene, and with her Destinies”

“The Lady sleeps!  Oh, may her sleep, which is enduring so be deep!”

“Hey lookee here, Edgar!  I bet you’ve never seen this before?  It’s called duct tape, and I’m just going to stick it over your mouth like so!  There now that’s better.  That’s much, much better!”