Hello Dear Readers!  This week’s Trifect Writing Challenge was to write a story between 33 and 333 words using the third definition of heart:  3: personality, disposition <a cold heart> 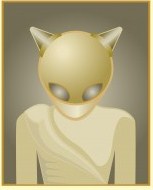 Gunther Randleroot couldn’t believe his eyes as green tears started pouring out of them.  Of course, they were green tears of joy because Gunther never cried tears of sorrow. Gunther was a Martian and nobody liked seeing a Martian cry especially not his girlfriend, Hazel.

Gunther poured the formula that he had finally perfected after seven years of hard work into the beaker like he was pouring out his heart.

When he looked out the window, he was surprised that everything still went on as usual.  He watched as a herd of sporks sauntered lazily about leaving behind a trail of feathers like they always did.

Stupid creatures, Gunther thought. Didn’t they realize that Gunther Randleroot was now the most powerful being in the universe?

All Gunther had to do was nudge the beaker to the floor, and the impact would release enough energy to destroy absolutely everything!  Gunther took a moment to revel in his new-found power — even though he was much, much too cowardly to ever actually use it!

“Whatcha doin’ Gunthy?” Gunther’s girlfriend, Hazel asked. Gunther jumped! He had forgotten to lock the door again. Sporkfeathers! He didn’t want Hazel to know what he was up to.

Not the formula in the beaker beans, but the can of Martian beans he was getting ready to eat.

Hazel ran to clean them up but slipped (Hazel was all antennas) and sent the beaker crashing to the floor.

Gunther screamed, “NOOOOOOOOOOO!” He closed his eyes and waited for the worst! But then . . . nothing happened.  Gunther looked around. There was Hazel straightening her antenna and through the window he could still see the sporks!

Gunther Randleroot couldn’t believe his eyes as green tears started pouring out of them for the second time that day.