Skip to content
HomeFlipping Through The Slightly Creepy Seventies

Welcome,  Dear Readers, to the weekend here at the blog! And because it’s Saturday,  we’re just going to kick back, drink some coffee, and flip (or flick if you’re from the UK) through old magazines from history’s  easiest decade to make fun of — the slightly creepy seventies!

Let’s turn to the page, shall we

Happily here’s a problem I’ve never had.  Wanting to look younger for my children.  Who wants to look young for their children?  I just figure as long as my appearance doesn’t embarrass them, they probably won’t ever notice how  young (or old) I look.

And how did slightly-creepy seventies mom stay looking young for her kids?  Well, by washing dishes by hand that’s how!

Back in the seventies, having young-looking hands  was really a big deal.  Nobody cared about your face so much, but,  boy oh boy,  if your hands looked old, it was all over sister!   And the best way to keep your hands looking young  was to sell your automatic dishwasher and wash all your dishes by hand using Ivory liquid dish soap.

Well this is an interesting headline:

Apparently back in the Slightly-Creepy Seventies,  only ‘most women’ were better cooks than their cookware.  There must have been some women wandering around the slightly creepy seventies whose cookware could cook better than they could.  How embarrassing!  I only hope their kids didn’t think their hands looked old –or they would have been sailing down the Slightly Creepy Seventies Creek without a paddle.

Okay, I’m not even exactly sure what a tool is, Dear Readers, but I’m pretty sure the guy in this picture represents The Quintessential Slightly Creepy Seventies Tool. 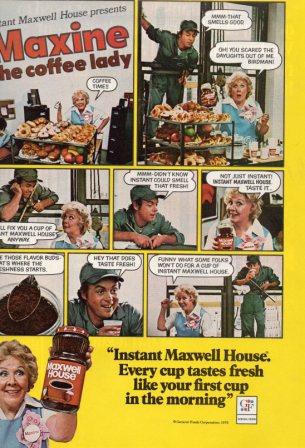 Apparently it wasn’t enough just to have ugly tile on your floors in the slightly creepy seventies, they had to go and make little sticky linoleum tiles that looked just like  your ugly floor so  you could stick them on your walls and on your cupboards and on your furniture and on your cat.

I’m sorry Slightly-Creepy Seventies  housewife lady but that is a stupid way to fold towels  in any decade!  (But if it’s any consolation your hands do look young — what we can see of them anyway.) 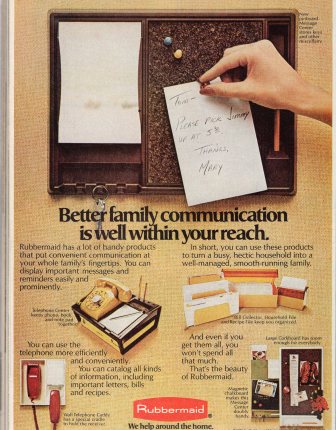 They were called notes.  And it was the way people kept track of their activities and whatnot in the Slightly-Creepy Seventies  before there were smart phones and text messages.

And they didn’t work very well either:

And finally, let’s end on this little bit of slightly creepy seventies fashion:

Okay, I can’t actually prove it, but what do you want to bet this couple with their matching Captain ‘N First Mate  t-shirts are the proud parents of The Quintessential Slightly Creepy Seventies Tool.   Oh, and  you’ll notice they’re also  hiding their hands.  Apparently they have an electric dishwasher.

Well, I’m afraid I’m going to have to close the magazine now, Dear Readers, as there is only so much of the slightingly creepy seventies we can take in one sitting!

16 thoughts on “Flipping Through The Slightly Creepy Seventies”