Hello Dear Readers!  Well another week has rolled more or less away, and as we slide into Friday on this last day of November, we have to ask ourselves what was going on with ads from 1953?  (See how I did that great segue way?  Who says things don’t get done right on Friday.)

Here are some ads from a magazine called Better Living from 1953 that for some reason, my brain, Peanuts, insisted on boiling down into limericks.

There once was a product named Kleenex

That met you half-way when you sneezed next

Got paid by the wad, see?

To get Father some money for Xanax. 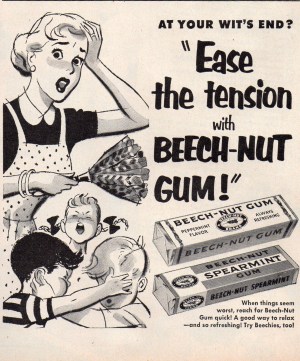 When poor fifties Mom must relax

But it makes her feel glum

What she needed was Father’s Xan-ax!

There once was a little food dude

Who claimed Wilson’s B-V was a food

It subtracted from rents

But to like it, you had to be stewed.

There once was a man who wore lipstick

People thought him the consummate dipstick

He drank coffee that sounded

So his wife mixed his cream with some arsenic

And there you have it, Dear Reader, the first installment and quite possibly the last installment of Limericks Base on Ads from 1953.