Hello Dear Readers and welcome to Screw It Monday where we don’t do anything at all.  Today, we’ll take a look back through the archives of this blog and pull out something from the bottom.  (Please ignore the mildew!) This is called:

Aliens Secretly Study Humanity Under the Guise of a 1960′s Sandwich Cookbook. 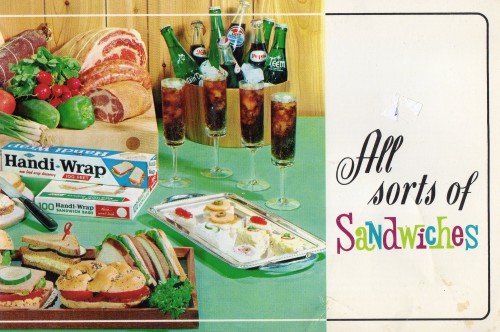 I know it’s hard to believe, Dear Readers, but after carefully examining the above peculiarly- worded cookbook from the 1960’s — it quickly became apparent to me that this is not a cookbook at all, but, in actuality, is a scientific study of the human race conducted by aliens from the planet Zorin!

Shall we turn to the first page? 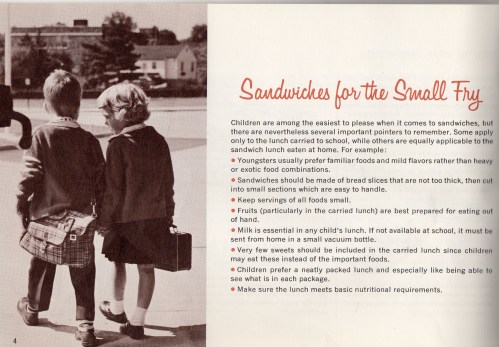 Sandwiches for the Small Fry

The aliens stressed that Zorinians should not confuse  “Small Frys”  with “small order of fries” even though both are equally delicious. 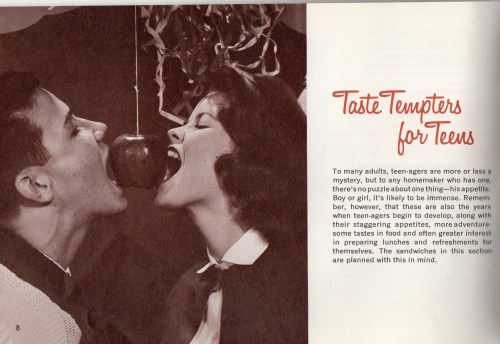 After much concentrated  study, the aliens have ascertained that this is a fair representation of  the typical eating behavior of the human “teen”.  And they go on to state that “teen-agers are a mystery”  — adding that “boy or girl their appetites are immense” even “staggering.”   The report emphasizes that  human “teenagers” have a “bottomless appetite” and an “endless thirst.”  Information that probably raised a Zorinian eyebrow or two (or seven).

Next the aliens attempt to enlighten Zorinians about the mystifying behavior of:

As you can see from this heading, when  it comes to alliteration, the aliens are definitely on-board the human-language train!  Even going so far as to use the word, “packables”.  Well they aren’t billions of years more advanced than us for nothin’!

At first, the aliens were in total disarray as to what the father figure pictured above was doing.  But after intensified study,  the aliens came to the conclusion that this particular human being’s lower appendages had collapsed by a whopping fifty percent (perhaps from carting around Picnic Packables?) and when that happens, human beings must squeeze a circular object with their “hands” for prolonged periods of time in order to restore proper appendage positioning.  The Zorinians got a good laugh out of this one!

Well that’s all we have time for today, Dear Reader, but rest assured there are plenty more Secret Studies by Zorinians about the Human Race hiding within the pages of 1960 cookbooks and I plan to expose every single one of them or be abducted trying!

That is my pledge to you.