Welcome Dear Readers!  I was thinking about candy yesterday. Maybe because Halloween is coming up or maybe because some days is just for sittin’ around thinkin’ ’bout candy. (Sorry, sometimes my brain, Peanuts, gets really obnoxious.)

Here’s some of the vintage gum and candy that my brain, Peanuts, remembers.

Black Jack Gum was a whole heck of a lot of fun.  It had it’s own original flavor which tasted a little like black licorice but not quite.  But the really cool thing about Black Jack Gum was that it was almost black so you could put it on your teeth and make it look like your two front teeth had been knocked out.  Which is always a bonus when you’re between the ages of five and 61. 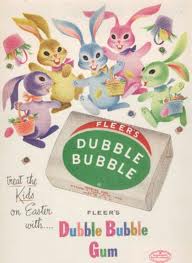 Our local store had a box of Double Bubble Gum in the candy rack.It must have been there for many years because the Double Bubble gum was as hard as a rock, and it actually hurt to chew it. When I was a kid, I thought the funnies that came with the Double Bubble bubble gum were included to make you feel better while you were experiencing the pain of chewing.

And an example of the comics found therein:

I remember eating Necco Sugar Wafers as a kid.  I never really cared for them much, but for some reason I would still occasionally buy them and try to eat them.  These tended to be the kinds of candies that would end up in the dust bunnies under children’s beds all over America along with jelly beans, candy hearts and black licorice Saltwater taffy.

According to Wikipedia, Necco Sugar Wafers have been around since 1847. Okay, maybe in 1847, when everything kind of sucked in general, people were fine with eating candy that tasted like Tums but why do people eat them today?  Could it be that “Tums”  is a classic flavor that will never go out of style?

They really were big too.  And they were only a nickel!  I have no idea what they were made out of.  They did have peanuts in them, an unpleasant fact I never let deter me because the taste of the taffy-like candy would block out the taste of the peanuts or, perhaps they used peanuts that didn’t have any flavor, which was fine by me.

Then there were Jawbreakers:

The particular jawbreaker that always sticks in my mind were the ones you could buy for a while in the 1950’s called Sputniks.  They were blue and had little spikes sticking out of them.  They really made your mouth sore –even more sore than stale Double Bubble bubble gum did, and they didn’t even come with comics to make you feel better while you were eating them!  Plus they tasted pretty horrible.

I suspect the Sputnick Jawbreaker was part of a government propaganda program to remind children how evil the Russian’s were for having launched a satellite up in space before we did.

Well Dear Readers, that’s about all the remembering my brain, Peanuts, is capable of today. But there are lots and lots vintage candy bars that are stuck between the teeth of my brain, Peanuts synapses — which might be worth prying loose one of these days.

In the meantime, my brain, Peanuts, wonders what your favorite candy was  a kid . . .