Skip to content
HomeDon’t Know What to Eat? I Know, Let’s Ask the Government!

I don’t know about you, but often times I’ll go to my refrigerator and open the door and stand there for days on end trying to decide what to eat.

Not only does this kind of thing waste valuable electricity, it also wastes valuable time that could be better spent checking weather.com for days on end to see if it’s warm enough to go outside.

Well, I’m happy to report, Dear Reader, all this has changed! Changed because of this 1942 American Red Cross Food and Nutrition booklet I chanced upon at the thrift store! 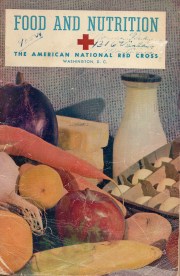 Let’s now turn to any page at random, shall we?

This looks like an interesting page. Let’s take a closer look.

Let’s call this “Man–Moderately Active,” Herbert.  As you can see, Herbert isn’t too happy with his job down at the factory. Well, who can blame him? Drilling holes in a 2×4 for no apparent reason all the live-long day tends to suck the joy out of Herbert’s me time.

Herbert’s only hope for happiness today or any day is that his wife will be cooking him a nutritional supper planned by the American Red Cross in conjunction with the U.S. Department of Agriculture to insure that Herbert gets a well-balanced meal so that he can live on indefinitely to perform his duties down at the 2×4 hole punching factory!

This Housewife is Herbert’s wife, Herberta. As you can see, she is wiping out a bowl which is her primary duty as Herbert’s wife. Uh Oh! Herberta doesn’t look like she’s planning a supper for her husband that would be deemed appropriate by either the Red Cross OR U.S. Department of Agriculture — let alone in conjunction with! 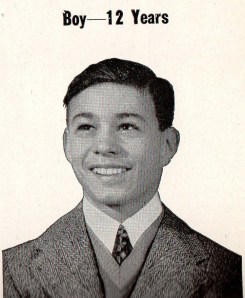 This boy–12 is Herbert and Herberta’s son Herbie Jr. As you can see, even though Herbie Jr. is only 12 that doesn’t keep him from looking, acting and dressing like he’s 47.

But just because Herbie Jr. always dresses age inappropriately in a white-dress shirt, tie, sweater vest, sports jacket and — I’m just guessing here — spats, Dear Reader, doesn’t mean that Herbie Jr. is over-compensating for the fact that his parents are losers. He just likes to dress up! God bless his Herbie Jr. soul!

The Chart that DoEsn’t Explain Everything!

This chart represents what the American Red Cross in conjunction with the US Department of Agriculture must insist that Herbert eat if he is to properly punch holes in a 2×4.  The columns in this chart represent “shares.”

As you can see, for example,  if Herbert shares his Vitamin B1 with 20 people and his Calcium with 37 people, he’ll  soon be the picture of health and the apple of the collective eye of the American Red Cross, I’d be willing to bet.

Of course, this means his wife, Herberta, is going to have to cook for upwards of 60 dinner guests every night but a small price to pay for the betterment of  the United States of America’s 2 x 4 hole punching industry.

Ok, but something tells me Herberta ain’t  gonna like it.

50 thoughts on “Don’t Know What to Eat? I Know, Let’s Ask the Government!”