Hello Dear Readers.  On this blog’s never-ending quest to uncover some of the most unappetizing foods ever trotted out in front of the human race, I am pleased to share my latest findings in the form of:

Anyway, let’s take a little journey back in time to marvel at what people actually put in their mouths in 1934 or as it is sometimes referred to by Food Historians, 193gore:

In case you’re wondering how to measure a speck, I have it on good authority that you simply show the can of Nutmeg to the spinach and then put it back in the cupboard.

(And I don’t have any idea what Mary’s rich white sauce was but since it was concocted during the Great Depression, I have a feeling it wasn’t all that rich.)

In the mood for a little 193gore Salmon Pie?

See there’s nothing in it that will hurt you.  No need to be frightened.  But if you look closely you will see that Mary has finally come to fiscal terms with the white sauce and has downgraded it from rich white sauce to thick white sauce.  Which is why Mary comes across as someone we can trust — even if she does smile like The Mona Lisa.

And now for the Ultimate 193gore Treat:  Luncheon Tongue Sandwich! 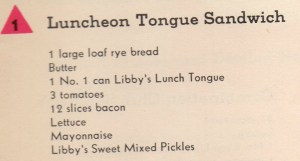 That Mary does it again! She has cleverly stuck one can of Libby’s lunch tongue in between an entire loaf of rye bread, 12 pieces of bacon and three tomatoes. Then peppered it with pickles and even went so far as to throw in a very exotic 193gore ingredient called Lettuce!   And all to keep that luncheon tongue from wagging!

Plus Mary has wisely chosen not to mention which animal’s mouth the tongue originally occupied.

Ah!  So that explains the enigmatic smile!