Today in Sunday School Gregory learned about what happened when Abram and Lot decided to go their separate ways after getting kicked out of Egypt.  Gregory couldn’t help imagining how everything might have happened.

In last week’s lesson, Abram became the Lord’s new favorite person, and the only thing Abram had to do to maintain his status, as such, was move to Canaan and have  cart-loads of kids which in those days were called descendants.

But first Abram took a detour to Egypt where he told the Egyptian King it was okay for him to sleep with his sister who was really his wife causing the Lord to fire up his smiter and smite the Egyptian king with a biblical disease from The Lord’s Big Book of Biblical Diseases.

Long story short,  Abram and his wife, Sarai and his nephew, Lot, had to schlep all the way back to Caanan  carrying all the riches they managed to wheedle out of the Egyptian king once the Egyptian King gave them the ol’ pharaoh heave ho.

Then Abram and his nephew, Lot, started up a company called  “Just Goats!” conveniently located just off the cart path between Bethel and Ai. 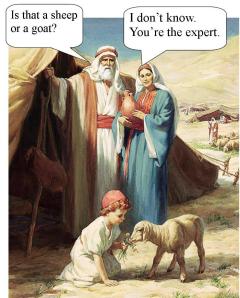 Everything was going great until Lot started messing with the business plan:

Lot:  Hey Uncle Abram, besides offering a senior discount for anybody over 600, I was thinking since we’ve got all these camels running around, we should start selling camels in addition to goats.

Abram:  Camels are disgusting. Nobody wants a camel.

Lot:  We could say they are super-sized goats.  Nobody will ever know the difference!

Abram:  Nobody wants a super-sized goat that’s really a camel.

Lot:  Then would you mind if I took the camels and opened my own business in beautiful downtown Sodom?

Abram:  You can do anything you want with those stupid camels as long as I don’t have to clean up after them.

Lot:  That won’t be a problem, Uncle, because everybody knows what happens in Sodom stays in Sodom, ha ha!  Get it?

Abram:  Sorry, I’m not much of a laugher.

So Lot took the camels and headed off for the Jordan Valley and Abram stayed in the land of Caanan with the Caananites and the Perizzites — a  pretzel-loving parasitic people.

As soon as Lot was out of hearing range, the Lord said to Abram:

Lord: From where you are look carefully in all directions — because I am going to give you all the land you see!

Abram:  Wow!  Thanks!  Would you mind if I got up on the roof first?

The Lord:  I am going to give you so many descendants that no one will be able to count them all!

Abram:  Uh, I’m not big on kids.  I mean the babies are cute — but as we all know, they eventually turn into teenagers.

The Lord:  It would be as easy to count all the specks of dust on earth!

Abram:  Are we still talking about kids?  I hope not.

The Lord:  Now go and look over the whole land because I am going to give it all to you!

Abram:  Gosh thanks, but would it possible to still get the land but maybe fewer kids?  Hello?  Lord? Hello?  Hello?

When the Lord quit answering  Abram’s calls, he decided to make the best of things by moving his goats, his slaves and his wife to a place called Mamre at Hebron.

There Abram build an altar to the Lord and hung out his  “Just Goats” shingle.  Then he settled into the long process  finding babysitters, interviewing nannies and building a cart-load of boarding schools.

And that concludes our bible story for today, Dear Readers.  Please remember to check back next week to see what happens. 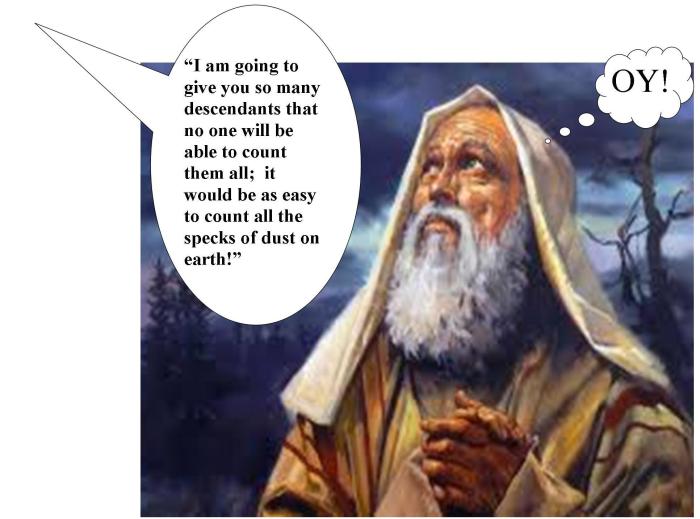