Meet Ruth Conrad Bateman. There are a couple of things you should know about Ruth. Ruth is a Professional Home Economist, Ruth has a “genuine feeling” for food, and Ruth doesn’t take any guff.

Now, Ruth has always been a restless soul and back in 1967, before the invention of transportation, Ruth apparently stumbled upon a little known country name Italy where they eat “Italy” food and stuff.

That’s when Ruth got a wonderful, very good idea. She would compile a booklet with “instructions” on how to make “Italy” food. And here it is:

Now look closely at this cover. There’s wine, scallops and overly large wooden utensils that Italy people are so fond of cooking with. If that doesn’t smack of Italy — Ruth Conrad Bateman doesn’t know what does.

Also note that Ruth has included valuable coupons inside. That adorable, irrepressible Ruth! Let’s see what gives with that: 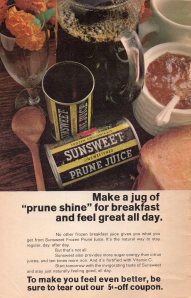 See you learn something every day! Who knew “Prune Shine” was Italian? Prune Shine is the natural way to stay regular, day after day! And when viewed in a prudential light, this could be considered a good thing.

However, if it turns out not to be a good thing due to having to urgently leave the room every ten minutes, Ruth has thoughtfully included a coupon to make you feel better about the situation:

Because Ruth knew that back in 1967, there really wasn’t much a person wasn’t willing to put up with for a nickel.

It’s also interesting to note that the makers of Sunsweet Prune Juice felt it necessary to use six adjectives to get you to drink it. Just a fun fact!

Now on to the Italy food! Or as Ruth puts it, “Lookee what I made!”

Here’s where Ruth really gets into the nuts and bolts of Italian food! Except instead of using nuts and bolts, Ruth is using jumbo shrimp. For you see, Ruth wanted an opportunity to tell us that jumbo shrimp is a delicacy that is available in many fine Italian restaurants which serve Italy food.

But Ruth doesn’t want us to feel embarrassed if we’ve never heard of jumbo shrimp before because they were only recently discovered by Ruth Conrad Bateman, herself, when she accidentally fell overboard while sailing in the Adriatic and surfaced with jumbo shrimp stuck in her hair net! So you see it’s nothing to feel unsophisticated about.

And finally, what Italian Cookbook would be complete without this helpful hint fresh from the lips of the Italy Food Diva, herself, Ruth Conrad Bateman:

And if that little treasure of wisdom doesn’t save you at least a nickel, Ruth Conrad Bateman will eat her hair net, jumbo shrimp and all!