Welcome Dear Readers to Lazy Friday Blog Day where I go to all the trouble of finding something I’ve already written, shaking the cobwebs off it, airing it out a bit and then giving it a quick once over with the iron.  Anyway here it is:

The Mysteries of Existence Explained

Good News!  I finally found a hobby!   It’s thinking up theories that would explain the mystery of existence. It’s fun.  Here’s what I’ve got so far:

The Advanced Form of Donkey Kong Theory of Existence

Could it be that we don’t really exist in this world at all?  Maybe we are actually in some cosmic Pizza Parlor playing a video game that seems like real life only when we die; it just means our pizza is ready?

There is a lot of evidence supporting this particular take on the nature of reality in that when your pizza is ready they “call your number”.   And we sometimes refer to someone’s dying as “their number being up.”  It seems plausible to a science  hobbiest such as myself,  that life might be just an advanced form of Donkey Kong you are playing until your pizza’s ready.

The “I Say Congealed You Say Cajoled” Theory of the existence

This one goes like this. Life is merely a humongous glob of uncongealed matter put here to cajole us into thinking that matter matters. 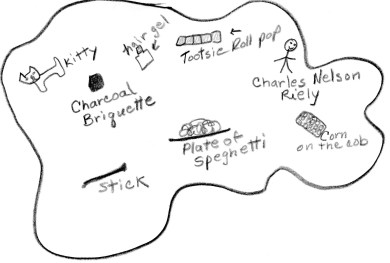 This conglomeration of The Great Uncongealed is designed to keep us so busy we won’t even notice that we don’t know who we are — what we are — where we came from — where we are going – or what we’re supposed to be doing. If true, it seems to be working pretty good so far.

This is the theory where upon  everything exists because and only because you “think” it exists.  It goes something like this:

You’re brain concentrates only on the things you want to have in your life.  It does this by directing a beam of energy out of your eyes and into, say, your living room, where whatever it is you just thought about is materialized just seconds before you sit down in that chair that was there seconds earlier but isn’t there anymore. (The Universe thinks this is hilarious, by the way, so just pretend you don’t notice or you will only encourage it.) 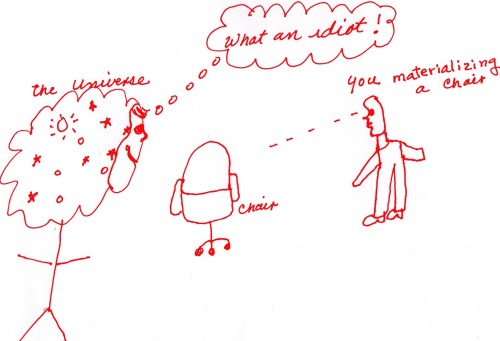 I know it’s a little confusing.  Perhaps if I tried explaining it in a different way . . .

Let’s say you are out in the forest when a tree suddenly falls just as you are entering the cottage of the three bears.  And as far as you know, there is nobody else in the forest.  Well, except maybe for Goldilocks but just for the sake of argument, let’s pretend she’s deaf. Isn’t this fun?

Did  the tree make any noise when it fell?  If you answered no, did it ever occur to you that you might have been slurping your porridge so loudly you couldn’t have heard a nuclear explosion?

16 thoughts on “The Mysteries of Existence Explained”